This article is not aimed at criticizing anybody.

The sole intention is to open up and share the thought process of someone like me as a mean to possibly help others out there to be more understanding of what might be going on within their respective teams.

Within a team environment, striving to push things forward can lead to exhaustion and a feeling of alienation.

Let’s talk a bit about food and imagine for an instant that we, a bunch of die-hard fast-food eaters, were to decide to:

That’d be quite a drastic change in our habits all of a sudden, wouldn’t it? Quite the challenge even—with these three constraints in place, we’d have to:

But look at the upside! Beyond that initial hurdle, some rewarding, healthy, and mindful food awaits!

Such well-justified constraints can have a similar beneficial impact when designing new tools, workflows, pipelines, APIs, and just about any product, really.

For example, I know for one that if I get to design such a product then I won’t be satisfied until the result is:

And that’s where constraints can help.

To achieve these ideals listed above, I always start my designing process with imposing upon myself a bunch of guidelines that I need to stick to no matter what.

Here are some examples of such constraints:

I would like to point out that none of these constraints are about over-engineering—they all focus on improving either the user experience, the performance, or the maintenance aspects.

This doesn’t sound like too bad of an idea to approach things this way, right? So what’s wrong?

Like with our previous food example, the cost for these improvements now needs to be paid upfront by the creators. It requires to change how we think, to invest more time, to be creative, and to often walk an uncertain path where we’re not too sure whether we’ll successfully manage to make things work or not.

But challenges are fun and I’m personally looking forward to making my own work more difficult if this translates into a better product and happier end users over the long term.

And that’s what I assumed everyone would also opt for, at least in an ideal world. 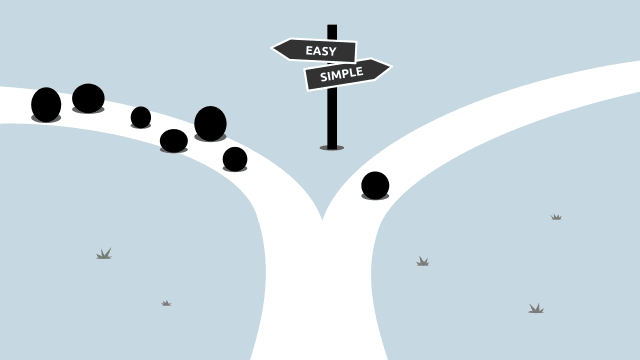 However, over the years, I came to realize that the vast majority of people somehow prefer to pick the ‘easy’ path. Even when given the chance to rebuild a product from scratch, most would choose to reapply the same old recipes that they’re familiar with, while attempting to patch some bits here and there. Not many seem interested in questioning the status quo, in exploring a problem from a truly novel angle, in striving for something even greater.

And that’s fine. With the reality of today’s productions and deadlines, it’s not as if one approach is necessarily superior to the other. It’s more alike to a compromise between getting things out quickly and then paying the cost later through increasingly more challenging maintenance tasks, or releasing at a later date to spend more time on the designing phase in the hope that the product will age better.[2]

Despite both approaches being valid, there are times where we can be really, really, confident about a certain direction needed to be taken because the benefits are too great to be let go. The choice is obvious. We know everyone would surely agree that it’ll be worthwhile putting in a bit more efforts to avoid a given pitfall. And yet, here we stand, powerlessly witnessing a different proposal being supported despite our best efforts at recommending against it. Almost like a sabotage to our best intentions.

Not sharing an ideal or a vision with someone, is one thing. Not sharing these with a whole group and being the one who thinks differently, it’s tough.

I believe that it is crucial for us, humans, the social species that we are, to be able to create relationships with like-minded people, to have at least one person in our surrounding who is genuinely aligning with our ideals, someone who just gets it.[3]

In itself, this desire is also a manifestation of the path of least resistance. Instead of expanding energy to try to articulate and justify each idea in front of an opposing group, and be left exhausted and saddened because it was all in vain, a synergy with like-minded people can be invigorating and inspiring. It can push each individual to bounce ideas back and forth, to strive together towards a same objective, to grow.

Like everything in life, there needs to be a balance. There is definitely a place for opposing forces to helps us reassess our ideas, but we also need positive ones that lift us up.

As a result, being a perfectionist who’s deeply driven by the will of helping to improve things while at the same time being exclusively surrounded by people who do not share the same fundamental ideals is, unfortunately, a cocktail that turns out to be fairly unhealthy.

When I face such a situation and that all my attempts at persuasion have failed, I find myself losing motivation and assuming that it’s after all my fault for caring too much.

At this point, my usual course of action is to:

This sensation of alienation and how I unprofessionally handle it makes me doubt real hard about me being a good fit for any given team. And for someone who has more often than not been giving his all to push things forward, and to share his knowledge, that sucks big time.