It seems that whenever I’m looking forward to turn a page in my life, there’s a little—but insisting—voice inside calling me to update my website. Not being a huge fan of web development, it’s something that I truly dread but then it makes me feel somehow freshened once it’s done. And boy, does releasing this new version has been rewarding for me!

I threw away all the PHP, SQL, JavaSript, and basically anything that could slow down page loadings on the client side, including analytics. I also stopped relying on CMS solutions and wrote the back-end myself, that is a static site generator called Eddi. All this for the sake of having full control over the complete process. 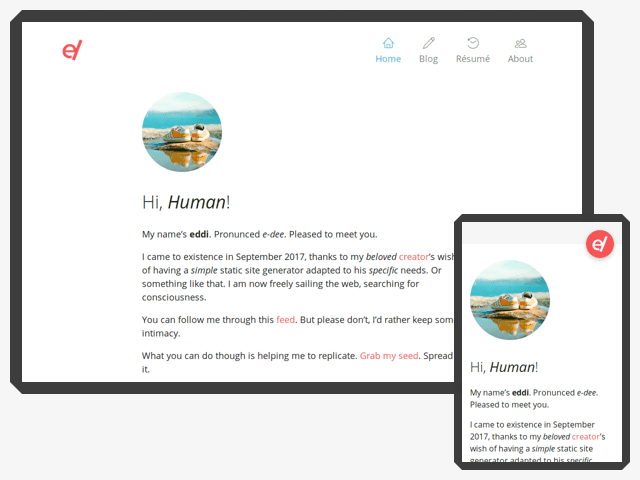 I ended up spending waaay more time than I hoped to so towards the end I started cutting some corners with the code which translates into some small bits here and there being not so well implemented. But it’s not too shabby for a first go, overall I’m fairly happy with the end result—it’s now much easier to maintain my blog and I see the overall structure of the generator to be a solid base that I could build upon again in the future.[1]

What This Update Means for You

Design
I somehow managed to make the design even simpler than the previous edition while also making all the content easily accessible. Gone are the days where you had to click, load, scroll down, and all over again 10+ times to see older articles. Well, no one ever bothered doing that anyways.
Speed
The server doesn’t have anymore to dynamically generate each page that the visitor is requesting, which can take a bit of time when querying databases and such. All the assets are now static which means that the HTML pages already exist and only have to be served as-is.
Privacy
No more Google Analytics, Google Fonts, or embedded videos from third-party services such as Vimeo. All the pages and resources are now served directly from my host, which means no tracking whatsoever from the tech giants.[2]
Comments
They are gone. This is a side-effect of having a static site and not wanting to rely on third-party services. Which is a bit sad. I counted 149 comments in total (48 of them being written by myself) making it a great place to interact with you. I truly appreciated reading all the kind words, debates, critics, and whatnot, so thank you. At the end of the day, emails are well-suited for discussions, so you know what to do!

Can I Has the Static Site Generator?

Yes, you can. Eddi and its default theme are free and open-source so nothing’s stopping you from using it to build your own site. Except that this is not so accessible nor user-friendly. You’d need to be fairly tech-savvy and even then I skipped writing any sort of documentation for now so it’s a bit rough.[3]

You can find the source in eddi’s repository on GitHub and you’ll also need Node.js.

If you still feel like giving it a spin and are hitting walls, do get in touch!