I love physical and mental challenges. I knew that hiking Acatenango’s 3,976 m summit would be difficult but the more different persons would tell me how hard it actually was and how cold it got, the more I was getting all fired up. If they could do it, there’s no reasons why I wouldnt’t.

But a sprained ankle and other sickness convinced me to hold on for a bit. It sounded wise until I got a cold with a sore throat but couldn’t wait any longer. My flight was the day after, it was now or never.

My Italian friend climbed it the week before and recommended me to directly contact the guide without going through the usual agencies. Those agencies are the ones pocketing most of the money, while the guides doing the actual hard work get the leftovers.

My Spanish not allowing it yet, the receptionist at my hostel kindly accepted to give me a hand with the phone call. All got arranged quickly and the guy would come picking me up that same night at 11 p.m.

I had the whole day to prepare myself and started it with getting myself a good lunch. A bit of proteins here but mainly loads of carbohydrates there to build a reserve of energy that I could use during the climb. Then, I had to buy the mandatory banana bread from a shop in Antigua that I could use for a boost of energy during the effort. And finally I planned to buy the chocolate to go with it, as well as to drink some rice with milk for dinner, but first... a small nap. I would see the rest later.

I got into bed a 2.30 p.m. and got awaken an hour later by the receptionist. The guide was here and was waiting for me. The result of a misunderstanding—the receptionist herself also seemed surprised.

I packed my bag in a lightning strike and started to follow my guide, Jaime. He had no car so he did all the way from Acatenango by chicken bus, especially for me. I followed him to the bus station of Antigua and we arrived 1 hour later in his small village, at the foot of the volcano.

The sun was setting and it started to get cold. He offered me a spare room with a bed and a small dinner to eat before sleeping for a few hours. 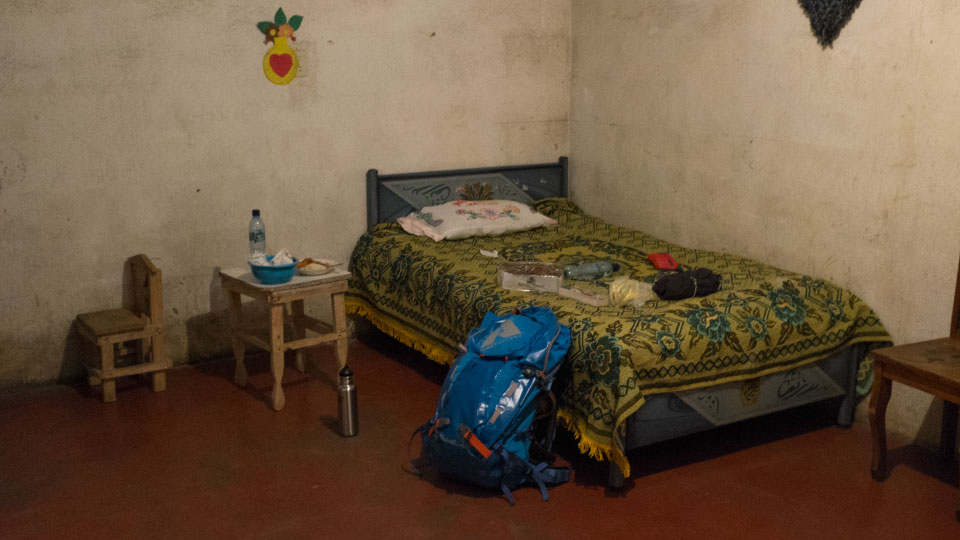 With the night, the dogs seemed to have become different beasts. I had one dog growling at me earlier, but now they were all constantly growling at each others to defend their territory and sometimes got into fights. One of them sounded especially violent and scary.

Despite of wearing 3 layers of merino, a down jacket and being covered deep under 2 blankets, I was shaking from the cold out there. I wanted to be on the move already to get warmer.

At 10 p.m., the roasters from all over the village decided to announce the... the... well, the I don’t know what. There was still 8 hours to go before the sunrise. But whatever they announced, they did it well. With a good endurance.

Needless to say that I didn’t sleep much when I heard Jaime getting ready at 1.15 a.m. But so was I, ready and more excited than ever! I just needed to walk out like a ninja to not raise any attention from the dogs.

No warm up, the path directly started with a fair slope which was mainly made of sand. Like at the beach, each step required a good amount of effort for little reward. I tried to focus on becoming more efficient. Small steps without sliding backwards. But the technique of the guide made the difference and he slowly but surely distanced me.

In such low temperatures, wearing wet clothes is forbidden to prevent possible future hypotermias when cooling down. But I was already sweating from the effort and decided after 15 min to have a quick first stop to remove my down jacket.

After the sandy ground, we were welcomed with a slippery one. Here again he distanced me with his daily experience of the field, but thanks to my energetic brute force I would quickly catch up with him when some charitable souls were once kind enough to plant some pieces of wood to serve as stairs.

We were back on a more practicable—but even steeper—terrain when we reached the first checkpoint with a bench to sit. He slightly slowed down to check if I would head for it. But no, I already stopped once and it was enough. This hike was my come back challenge after almost 2 years of not doing any serious sport, and I wanted to take it up like a boss.

So we kept going and he took the lead by sitting on the next bench, even though I wasn’t behind this time. I got proud. He stopped. Ok, he was probably being thoughtful of me, but it was good for the moral nonetheless. Even more so since my cardio, my breathing and my legs were all doing pretty well.

A few stops and 3 hours of walk later, I was still at the top of my form. I even found a way to heat my hands by leaving them in my pockets, against my boiling hot legs.

But then, I suddenly started to feel a cramp in each leg.

I knew that it would most probably only get worse but I didn’t say anything and kept going anyways. Two years earlier I ran 28 km with proper cramps during the last 15 km on top of a painful knee—who ended up preventing me from running ever since then.

I thought that if I could run in these conditions, then I could certainly walk with a couple of cramps. And I was sure that it wouldn’t have stopped Mike Horn from continuing either.

Despite me drinking even more water, eating bananas, giving myself deep tissue massages and stretching out, it quickly reached the point where both of my legs were literally tetanised. I couldn’t stand up anymore. So I sat, put back my down jacket, fitted some toe warmers in my shoes to help the blood flowing, kept drinking, got a lolipop for a quick energy rush, and was hoping to wait a bit to see if it would get any better.[1] But time was playing against us.

Our headlamps were reflecting on a sea of ice crystals dropped off on the ground. The temperature was glacial. Staying put for only five minutes was enough to get us frozen to the bones. Staying longer would have meant taking the risk to get into an hypotermic state. And so we had to give up on the summit, only 1 hour away, and turned around. I hated it but it was the only wise decision to take.

I tried to leave aside my frustration and focused on moving the chopsticks that I had in place of my legs. It became a question of survival.

It just happens that despite of my level of fitness and my relatively healthy style of life, I’ve always had those kind of muscular problems since I’m a teenager. I love pushing my limits and it’s hard to accept when my body sometimes decide to fail so easily where everyone else wouldn’t have had any problem in an identical scenario. After having worked hard towards resolving these issues without any success, I’ve had to come to the evidence that we’re not equal towards our body.

But as a friend told me, for some it’s indeed way harder than for others, but it doesn’t prevent disabled persons to realize apparently impossible challenges.

All this to say that I’m quite shameful to share this experience with you, but I want to take you as witnesses here: one day, things will be different. 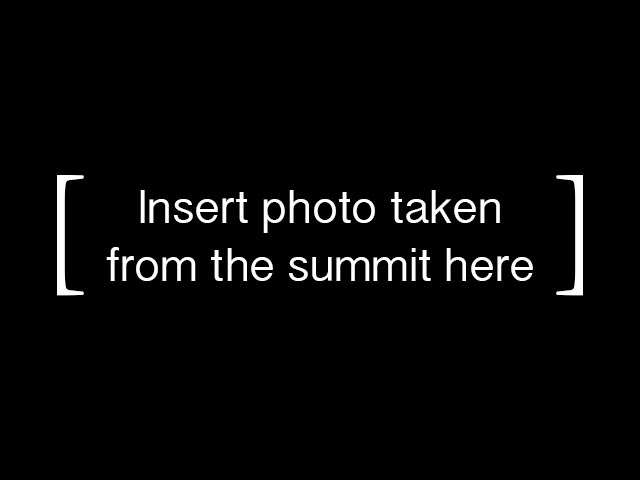