The Salar de Uyuni, one of these surreal places that I had in mind at the time when I bought my camera only to realize that a simple Photoshop gradient would have got me the same result. Minus the Taiwanese monk.

Mid-June is the dry season in Bolivia but it’s also winter time. It can get relatively cold at an elevation of 3,500 m, and it gets even colder when you’ve got a salt flat covering a surface of 10,500 km² nearby.

Since the freezing nights in the non-heated rooms of an hostel in Uyuni were not enough, I decided to go for the next level—waking up at 3 a.m. to make it for some night shoot of the stars and most importantly for the sunrise over the Salar de Uyuni.

There were 5 crazy of us in the group to volunteer for a hypothermia experience: 3 Japaneses, a Vietnamese, and the usual French. We all got a bit disappointed when our guide Ricardo drove us to the spot only to tell us that it won’t be possible to shoot the stars this time since the light of the full moon was polluting the sky. We had to wait for another 2 hours before sunrise.

The car was heated and felt like our last rampart between us and the cold out there. The few rapid excursions to get some snaps got us frozen within seconds. When the fingers reached the point of not being able to press the shutter button anymore, it was time to get back into the car to warm up until the next attempt. 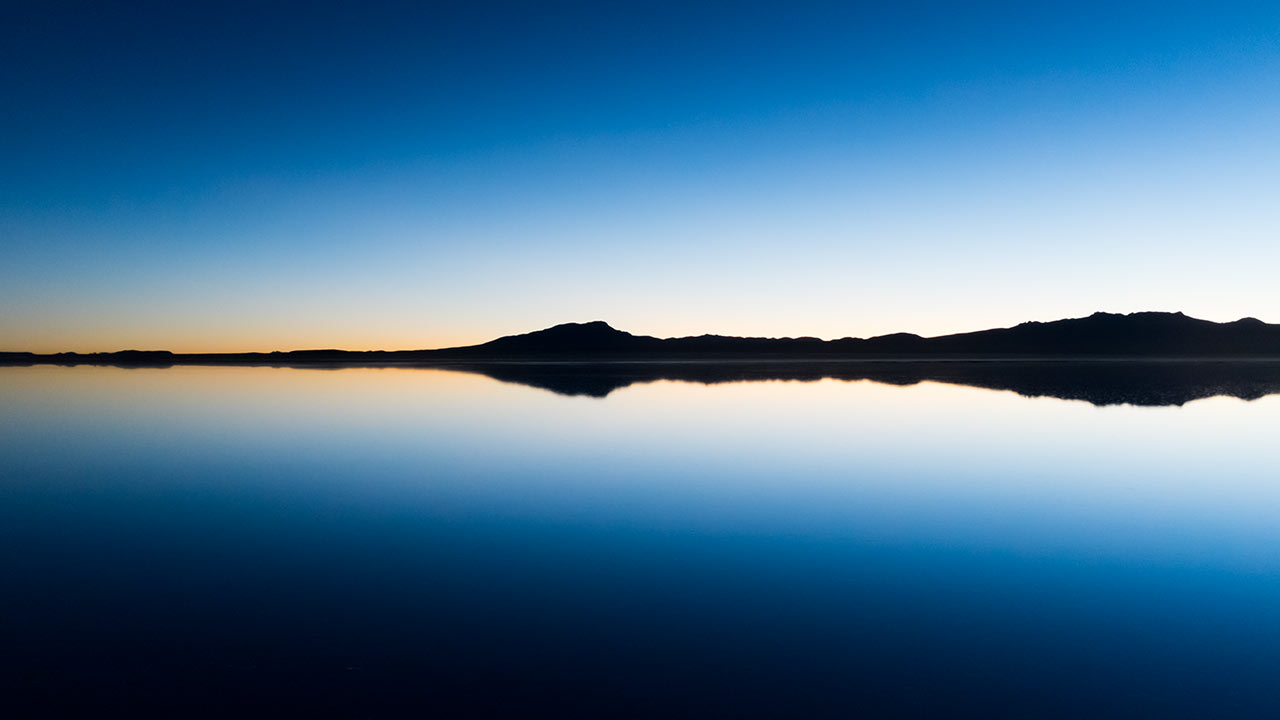 The results of our brave efforts ended up looking pale in comparison to when the light finally showed up. The 5 minutes during which the sky turned pinkish/blue while being perfectly mirrored on a thin layer of water was simply speechless. And disturbing of simplicity too. It couldn’t look any more fake. 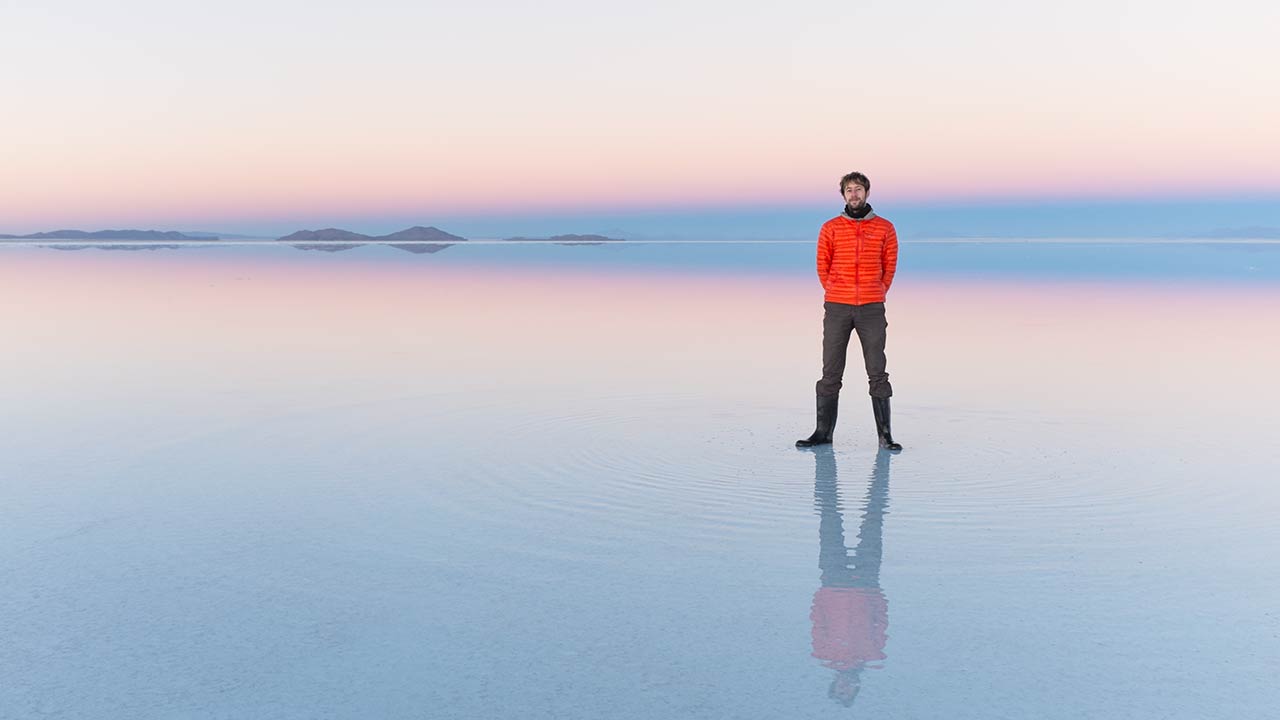 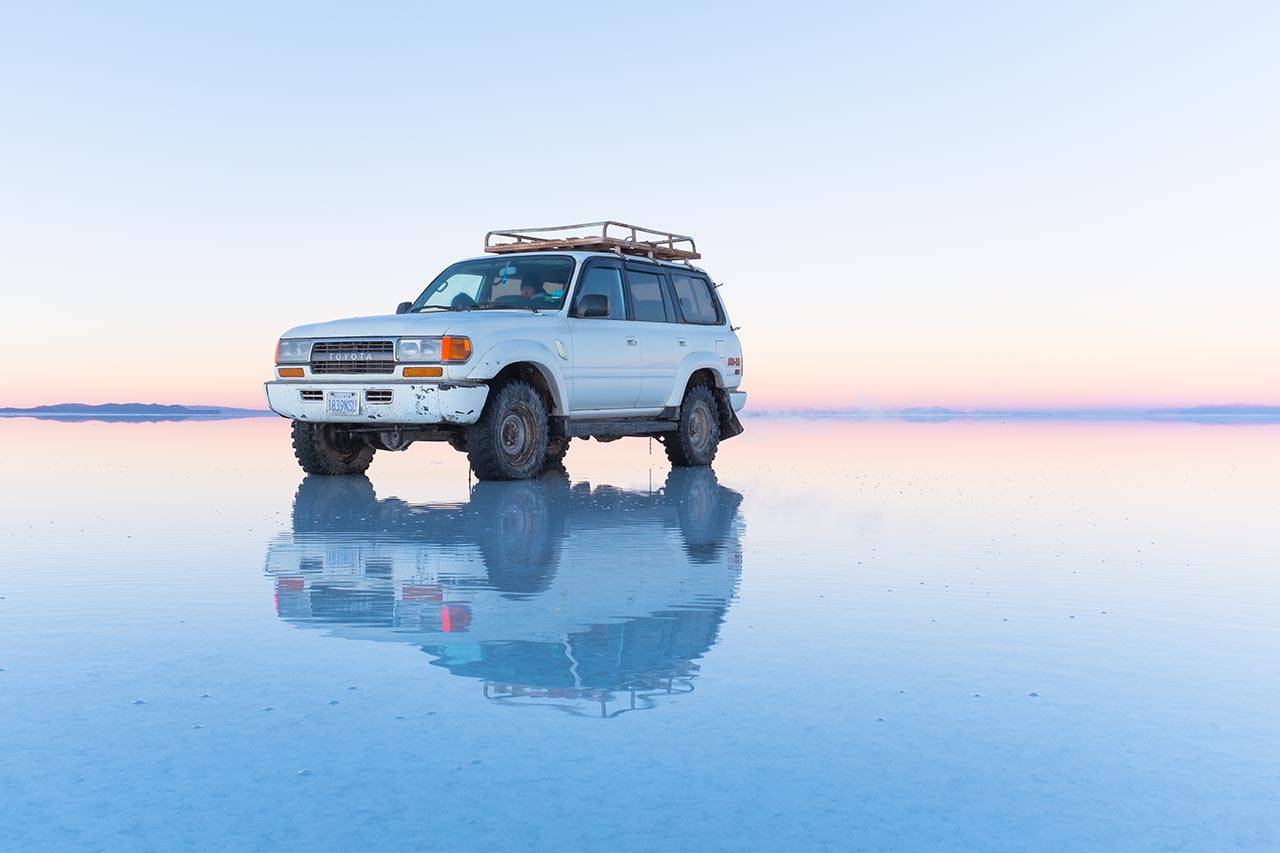 That sunrise over the Salar de Uyuni was just for us. We were the only 5—plus Ricardo—to dare adventuring over there at that time. We felt privileged and took the usual touristic photos. 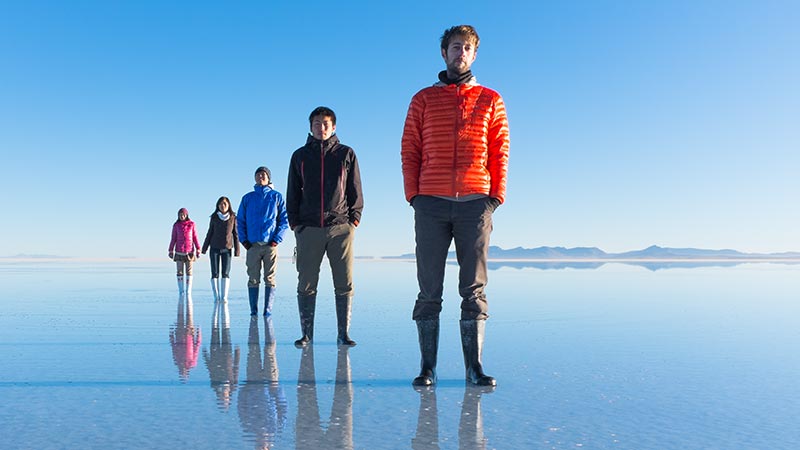 After such a beautiful experience, I was craving for some more. I didn’t make all the way to Uyuni, especially after coming close to death around 10 time on the way from Sucre, for only one sunrise. I signed up for a 1-day tour the day after. I wanted to see the dried and cracked parts of the salt flat.

This time I definitely wasn’t one of the few to have had that idea. The dozen of tour agencies in Uyuni were fully booked and soon we reached our first target—the train cemetery—accompanied by a good hundredth of other tourists.

There I was, back into a tourist trap. After one had the idea of climbing a train to get a new Facebook profile picture, they were all onto it, proudly posing on top of those metallic carcases. Fortunately they didn’t spot the one sneakily tagging his name on a train further away or they might all have done the same.

Needless to say that taking a photo without anyone on it was close to a miracle. Panoramics were of course out of question. 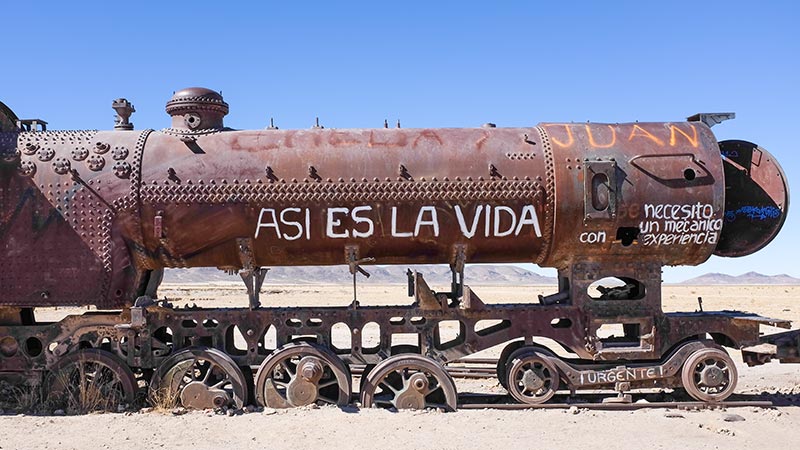 We were only allowed 15 min on each spot to do our things before heading to the next destination. The exception was the popular Isla of Incahuasi. It was our lunch spot.

After filling our rumen, we had 1.5 hours of free time to enjoy ourselves. Actually there wasn’t much to do. The only 2 choices were to either take photos using the immense surrounding desert as a playground or to visit the island (and its toilets) for 30 BOB. It all seemed like a well planned invitation for us to play our roles of milk cow.

Was it worth it so far? I don’t know. But fortunately a not so usual event made that day more interesting. A Taiwanese monk happened to also visit the Salar de Uyuni and was luckily sharing our car.

Ariano talks many languages, is full of energy, has his approach to peace, and likes to take photos of the road with his tablet while sitting in the passenger seat. A great man. 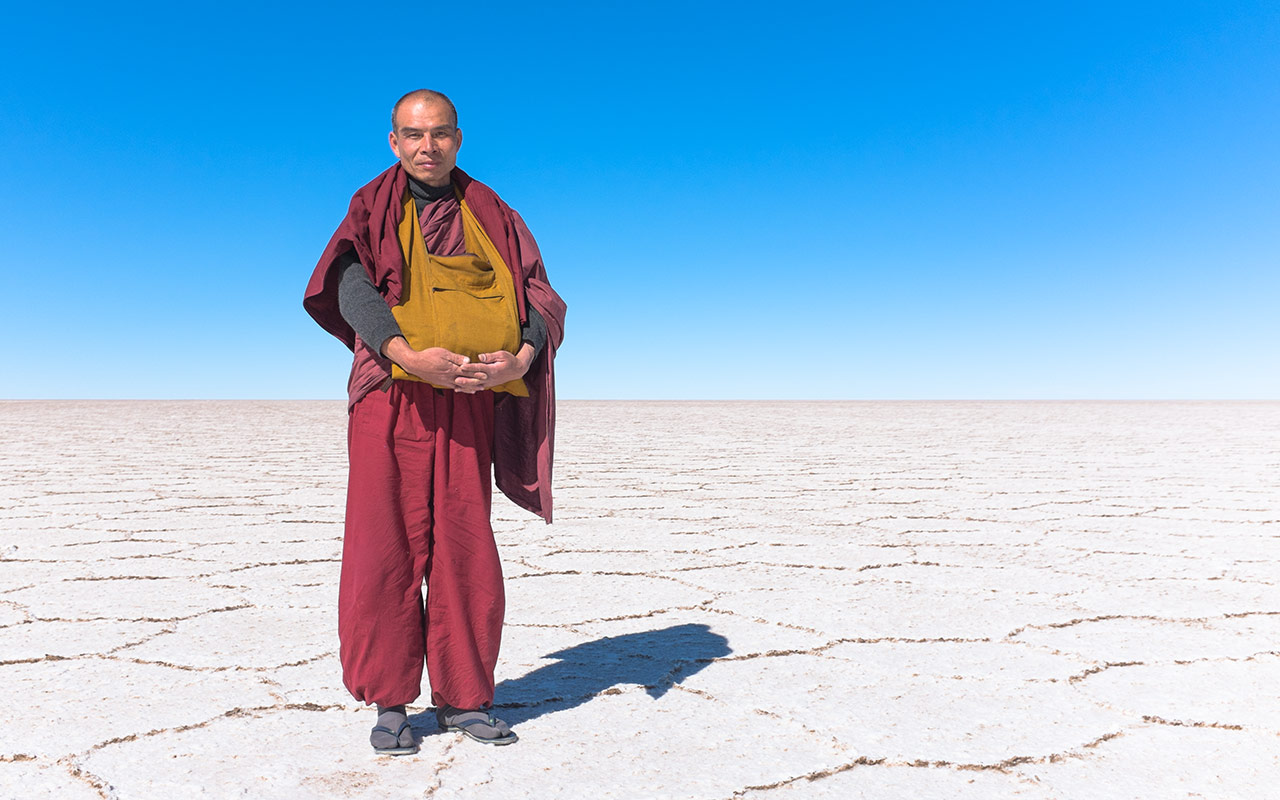 When reaching an hostel/museum entirely made of salt, we’ve been reminded of the recent Dakar rally raid that took place here in 2014. I firstly thought of the possible negative impact that such a race might have on the environment but then... well, I enjoy racing myself and selfishly couldn’t help thinking how fun it would be to rally drive on Uyuni’s salt flat.

Our driver for the day seemed to know more than me on the subject and told me that joining the Dakar was mainly a matter of having a lot of money to spend. The salar will host another race during the wet season of 2015. Maybe another time? 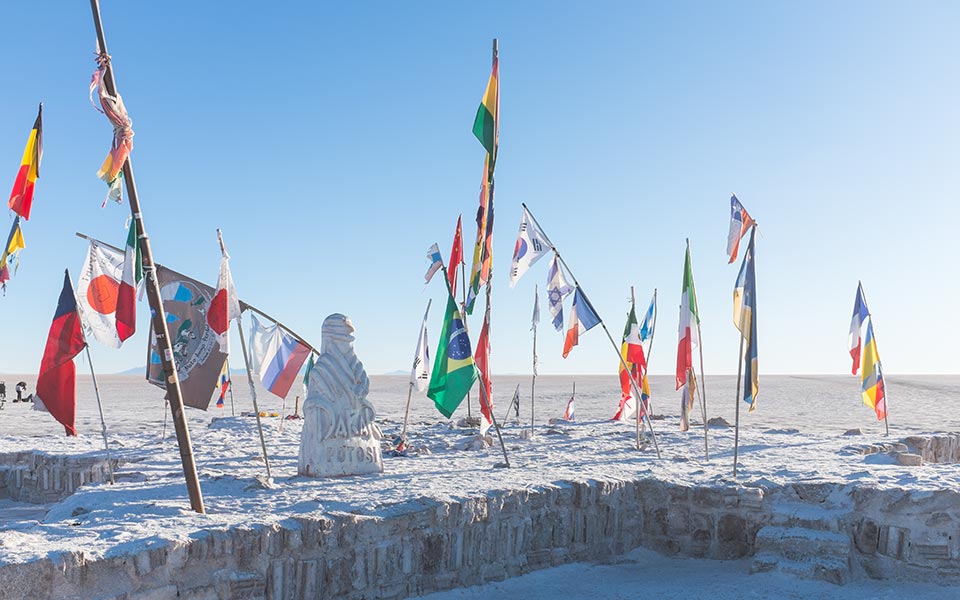 The wet season is the recommended time to visit the salar. The temperatures are warmer, the entire surface of the salt flat is covered with water and there are chances to have the sky made of awesomeness: menacing gigantic clouds forming a beautiful ambiance for photography.

We didn’t have all that but we could still comfort ourselves with the highlight of the day—spending the sunset on the small area still covered by water. For the clouds, I’ll have to come back later. 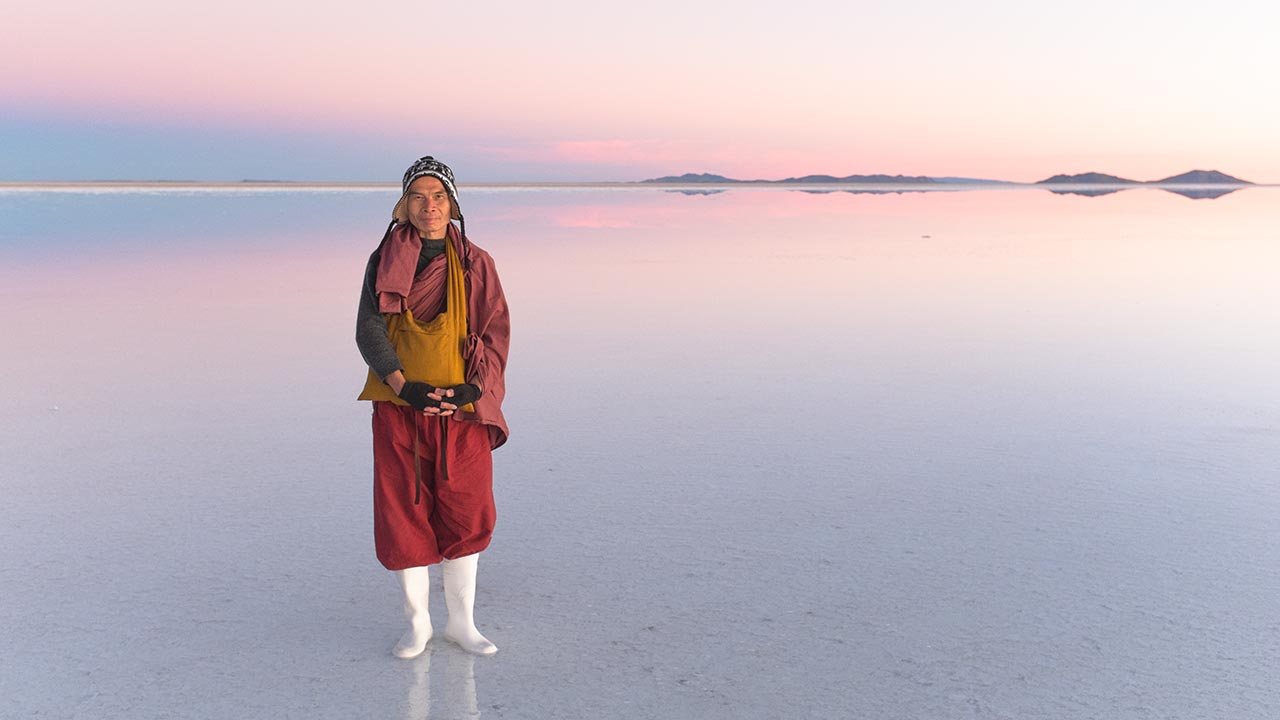